Dean of the School of Music 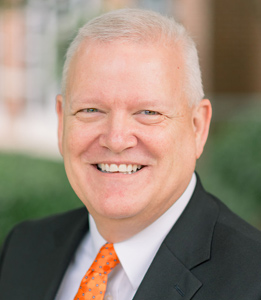 A native of Azle, Texas, Dr. Gerber previously served as dean of the School of Fine Arts at Ouachita Baptist University (OBU) in Arkadelphia, Arkansas. He also held appointments as chair of the Division of Music and professor of music.

Dr. Gerber earned his Bachelor of Music from Tarleton State University in Stephenville, Texas, and both his Master of Music and Doctor of Musical Arts in choral conducting from Southwestern Baptist Theological Seminary in Fort Worth, Texas.

His areas of expertise include choral music literature, choral techniques and choral conducting.

Dr. Gerber for 16 years directed the OBU’s concert choir and teaches various conducting and choral methods classes. The Ouachita Singers, under his direction, were selected to sing at the Arkansas All-State conference and the Southwestern Division of the American Choral Directors Association convention. He has taken the choir on numerous tours throughout the U.S. and overseas, most recently to Italy in 2017.

Before coming to OBU, Dr. Gerber served as director of choral studies at Southwest Baptist University in Bolivar, Missouri, from 1996-2004. He also served as music director and conductor of the Missouri Baptist All-State Youth Choir and the Missouri Music Men, a male chorus of ministers of music from Missouri Baptist churches. He was founder and director of the Bolivar Community Chorus, a chorus that sang four to five times a season and regularly joined the choral forces at Southwest Baptist University to present large-scale choral works.

In addition to his academic work, Dr. Gerber has served as interim minister of music in several Baptist churches. He is active as a clinician both in the public school and church music fields.