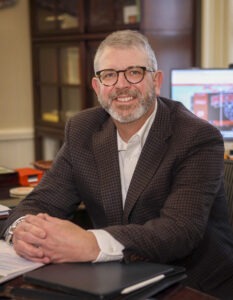 Dr. Scott Davis was appointed Mercer University Provost in January 2012. During his tenure as the University’s chief academic officer, Mercer has risen to R2 in the Carnegie Classification, been admitted to the Georgia Research Alliance, and been awarded a chapter of Phi Beta Kappa.  The University has reached record enrollment with over 9,000 students. The University established an academic health sciences center and its 12th academic unit, the College of Health Professions, opened the Mercer Innovation Center to support entrepreneurship, and expanded its School of Medicine to the Columbus campus. Externally funded research has doubled to nearly $50 million. The University has helped hundreds of students earn nationally competitive awards, including Fulbright Scholarships, Goldwater Scholarships, Hollings Scholarships, Pickering Fellowships, and Rangel Fellowships. In addition, Mercer University has been recognized as a top producer of Gilman Scholars.

Dr. Davis joined the Mercer faculty as assistant professor of chemistry in 1991, was promoted to associate professor in 1996, and served as chair of the department from 2000-2002, when he was named associate dean of the College of Liberal Arts. He served as associate executive vice president from 2003 to 2006, when he was named senior vice provost for research and dean of graduate studies. Dr. Davis holds the rank of professor of chemistry.